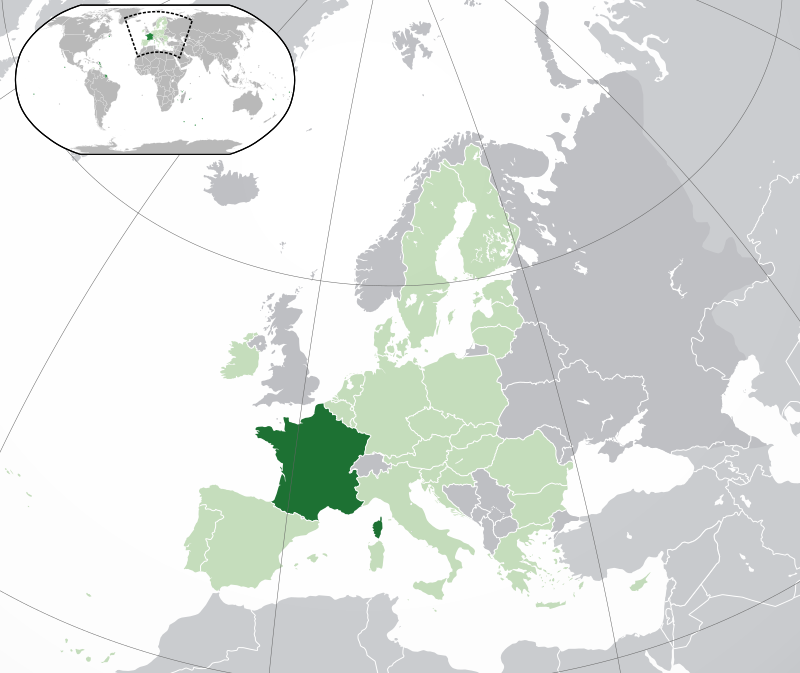 France (locally [fʁɑ̃s]), officially the French Republic (République française [ʁepyblik fʁɑ̃sɛz]), is a country with territory in western Europe and several overseas regions and territories.[XIII] The European, or metropolitan, area of France extends from the Mediterranean Sea to the English Channel and the North Sea, and from the Rhine to the Atlantic Ocean. The republic also includes French Guiana on the South American continent and several islands in the Atlantic, Pacific and Indian oceans. The country's 18 integral regions (5 of which are situated overseas) span a combined area of 643,801 square kilometres (248,573 sq mi) which, as of January 2017, has a total population of almost 67 million people.[3] France is a unitary semi-presidential republic with its capital in Paris, the country's largest city and main cultural and commercial centre. Other major urban centres include Marseille, Lyon, Lille, Nice, Toulouse and Bordeaux.
https://en.wikipedia.org/wiki/France
Top

Clashes with police, concert hall 'under threat' in Paris over Congolese artist performance
Protesters opposed to the DRC government have clashed with police in the French capital ahead of a music concert by Congolese singer Heritier Watanabe at Paris' Olympia music hall. All protests in the vicinity of the venue were banned as threats of an attack during the event had been received.

Clashes erupted ahead of the concert Saturday evening, with protesters accusing the hip-hop singer from the Democratic Republic of Congo (DRC) of supporting the government of the central African country.

One of the demonstrators told RT en Francais she considered Watanabe’s concert to be "indecent." A number of Congolese artists, including Watanabe, are often targeted by opponents of the DRC government, especially in Europe.

Paris authorities had banned all protests in the vicinity of the hall, but this did not prevent public disorder as anti-DRC government demonstrators clashed with police about an hour before the scheduled event.

Earlier this week, Olympia’s management asked for the concert to be canceled and filed an urgent complaint to city authorities and the police after receiving threats to target the event.

Representatives of the venue claim to have received letters, e-mails and telephone calls, threatening "a new Bataclan," the RTL broadcaster reported.